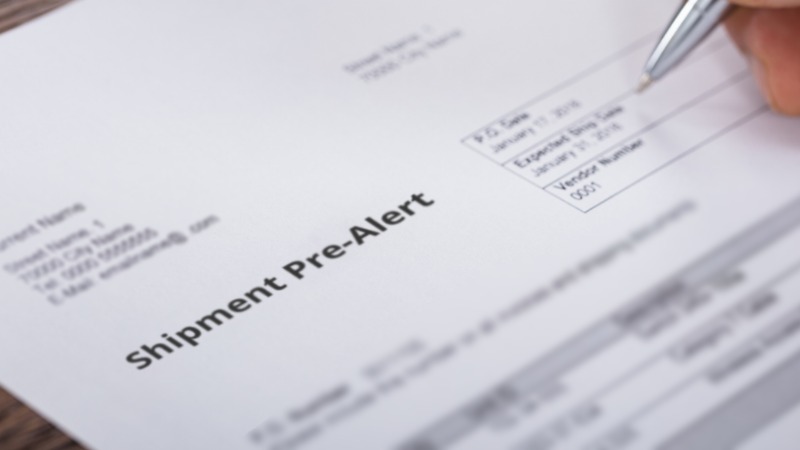 Shipping cargo requires a good amount of documentation and preparation, especially for shipments that have a short transit time. In order to ensure that the import process at destination goes as smoothly and efficiently as possible, a pre-alert is sent.

A pre-alert is a shipment notice sent by the freight forwarder at origin to the freight forwarder or customs broker at destination, so that they can prepare for the import clearance and delivery arrangements in advance. It signifies that the shipment has already been loaded and also indicates the estimated arrival along with other important shipment information.

This article will discuss everything there is to know about pre-alerts and why they remain an important part of the shipping process. We’ll also explore what information is typically found on pre-alerts and illustrate this with a template and sample.

What Shipment Information is Found on a Pre-Alert?

A pre-alert in shipping can have many purposes. For the importer or the consignee, the pre-alert is used for advanced planning and distribution. For the freight forwarder, it’s primarily used for submission of the inward foreign manifest and the on-carriage.

Lastly, for the customs broker, the pre-alert is used as a document to prepare import customs clearance and in some countries it’s even used to pre-declare shipments before they arrive. Here’s a list of shipment details that are typically found on a pre-alert.

Where is the Pre-Alert Sent to?

Once the exporting agent or freight forwarder has delivered the cargo to the port, completed the export declarations and the carrier has loaded the containers on the vessel (or the pallet into the aircraft), the carrier or NVOCC sends pre-alert to the shipper and its agents at destination.

The notify party is most commonly the destination freight forwarder and/or customs broker. Occasionally, the pre-alert is also sent to the consignee, so that they are aware of the shipment’s arrival and can plan accordingly.

How is a Pre-Alert Sent?

The current industry practice for sending pre-alerts is through email, by the origin freight forwarder. The information on the pre-alert is gathered from various shipping documents, consolidated, attached and sent via email.

More sophisticated freight forwarders have a transport management system (TMS) that is able to automatically send a pre-alert to specific parties upon retrieving and uploading all required documents in the system.

Keep in mind that while the shipment is in transit amendments to the shipping documents or information can happen. It’s generally a good idea to avoid amending any type of documents at least one week before arrival, to ensure that the import clearance and on-carriage can be planned accordingly.

For What Modes of Transport are Pre-Alerts Used?

Pre-alerts are usually sent and received for shipments via air and sea. This is because these modes of transport mostly include import customs clearance and other destination activities such as on-carriage and cargo receiving.

Below is an example of a pre-alert that is issued by a freight forwarder at the destination.