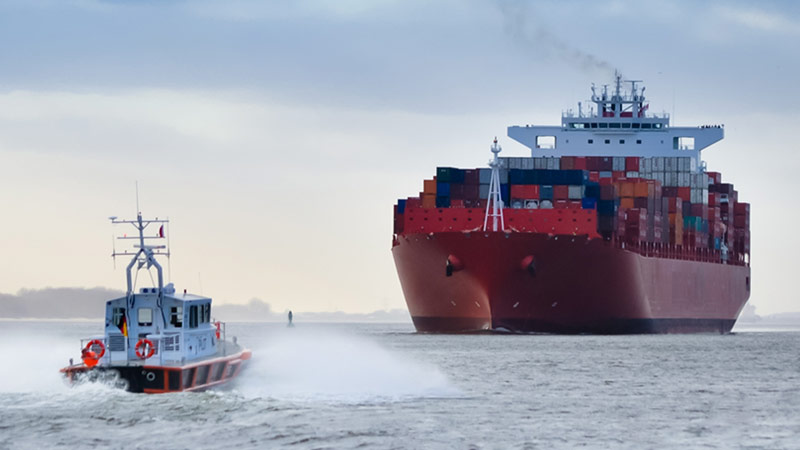 Shipping ports have become increasingly complex and are growing at a record pace, with new ports opening regularly. Some ports can even have more than 1,000 vessels at any given time. This is one of many reasons why ship captains need to be fully aware of weather conditions, traffic, tides, berthing and other important information. That’s where pilot boats come in.

Pilot boats are small ships that take maritime pilots to vessels that are arriving at the port. Onboard, the pilot, the ship captain and their crew will assess important information such as the vessel’s arrival plan, berthing location and other topics, to ensure safe passage throughout the port.

Pilotage plays a vital role in keeping ports and ships safe.  This article will go into detail on pilotage services and the importance they play in getting vessels, cargo, crew, and passengers safely into port.

What Are Pilot Boats?

Not all ports have the same layout and port conditions and schedules can change rapidly depending on market situations.

When a vessel arrives at a port, it’s captain and crew need to be briefed on critical information. This is where pilotage is needed because a captain relies on the pilot’s expert knowledge that caters to these dynamic situations.

While maritime pilots carry on their duties, their main objectives are the safety of people, protection of property and the environment. The information a maritime pilot provides are port conditions, tide levels, harbor depths, wind speed, visibility, and dock/berth infrastructure.

Having an onboard pilot reduces the risks of potential accidents and the captain of the vessel must give a harbor pilot complete trust. Becoming a harbor pilot takes years of training and maritime experience.

How Does the Pilotage Process Work?

As the saying goes timing is everything. Maritime pilots know the schedules of the vessels that are arriving in advance and plan accordingly. Through automatic identification systems (AIS), vessel positions are tracked and located.

This is when the pilot boat starts to approach the vessel. The process of getting a harbor pilot onto a vessel is called pilot transfer.  The International Maritime Organization (IMO) publishes standards with regards to pilot transfer arrangements.

Getting a pilot to ascend onto the vessel and descend the vessel is the most dangerous part of the job. It’s a rarity that perfect conditions are always present, due to weather conditions, port traffic, tides and many other unforeseen circumstances.

The pilot boat positions itself alongside the vessel and the pilot climbs up using a ladder that is thrown over the side of the ship. The pilot must ascend the ladder and make his way upward to board the vessel.

Once the pilot is on board their main objective is to get the vessel docked safely by communicating real-time updates on vessel position, distance to destination, possible hazards, and actual harbor traffic in the vicinity. The harbour pilot will work closely with the ship captain and their crew.

Nautical flags are a means to communicate with other vessels or ports while at sea. There are multiple flag types, whereby square flags represent a letter of the alphabet.

Each flag is hoisted on a ship’s flag pole or halyard and is displayed prominently. Here’s a list of the signal flags related to pilotage and what they mean.

This is the (G) Golf flag. When a ship is flying the golf flag, it’s indicating that it requires a pilot, in order to proceed.

Hotel Flag – Pilot On Board

Once the pilot has successfully climbed the ladder and is on board of the ship, the (H) Hotel flag will be hoisted and replaces the Golf flag.

Who Pays for the Pilotage Service?

The pilotage service is typically paid by the vessel operator to the port authorities. Each port will have its own pilotage tariff, that is usually based on multiple factors.

Pilotage tariffs are typically charged by gross tonnage of the vessel or per ship, depending on the ship’s port call. These rates are made public and are published on a regular basis, so that vessel operators can factor these costs in.

At some ports, if a ship is going to dock for repairs, changing of crew, or accepting other deliveries, pilotage fees may be discounted.  If a vessel requires mandatory pilotage and does not pay the fees, it may not be given clearance to berth.

Are There Any Exceptions to Pilotage?

In most scenarios, pilotage is a mandatory service for vessels.  The nature of pilotage is related to safety and protection of the port’s property and equipment.  It is an essential part of port operations and must be made available at all times.

As a general rule, exceptions can be granted, depending on the vessel’s call port. However, it would need to meet certain criteria.  These include the captain’s familiarity of the port, vessel visit frequency, size and gross tonnage, weather conditions, and cargo type.

In some countries, failure to secure pilotage services may result in fines and imprisonment.

A Brief History of Pilotage And Beyond

Pilotage has traces back to the Roman and Greek era. Recorded history notes that even Marco Polo and Vasco Da Gama had help from harbour pilots during their expeditions.

Through globalization, global trade would soon be the norm and for it to flourish, harbor pilots would guide vessels into port safely. This was a common practice, as ship captains were unfamiliar with port layouts, traffic and berthing locations.

There are many historic documents that elaborate on how pilotage started in most countries. France, England, China, Spain, and Portugal all have a rich port history where pilotage played, and still plays a critical role.

At present, the pilotage industry seems to face several challenges due to advanced technology, such as automation. Ships are getting bigger and technology is getting more advanced.

Certain industry experts are unfazed by these developments, as pilotage services have been tested throughout time and have been proven to be essential in the safety of vessels and ports.

As of now, the future of pilotage is still unknown. Will auto-berthing technology become parlance in the maritime industry or will autonomous vessels phase out pilotage services? No one knows. But for now, they remain mostly a mandatory service.