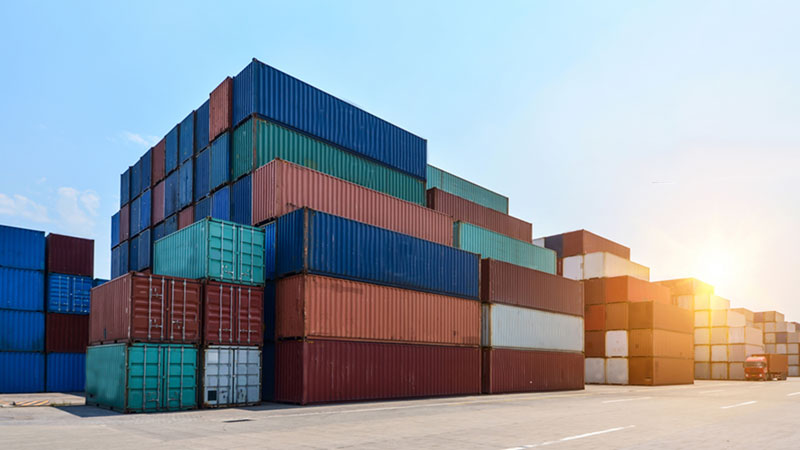 With an estimated 1.83 billion metric tons of goods moved through shipping containers in 2017 alone, global demand and supply is constantly on the rise. In light of this, we often see mountainous piles of containers in yards and facilities, as well as on vessels and transport vehicles, such as trains and trucks.

One common question that naturally arises is, who owns all these containers?

To give you the short answer, shipping containers are largely owned by shipping lines and leasing companies. However, it’s not uncommon for freight forwarders, NVOCCs and shippers to own containers as well.

Container ownership can be better understood if we take a closer look of the ownership dynamics, such as supply, cost and requirements.

In total there are 5 different entities that typically own containers in the world of shipping! Let’s explore them in more detail.

A large portion of shipping containers are owned directly by shipping lines, also known as ocean carriers. This is the reason why this type of container ownership is referred to as carrier-owned containers, or simply put COC.

The reason why shipping lines own containers is that it gives them direct control over the supply. They can then match this supply with their total vessel capacity and overall container distribution. This enables them to give a shipper an ‘all-in price’ for moving the cargo from one location to another.

However, this can also present some challenges, too. Due to the vast routing network of shipping lines, as well as unpredictable demand and supply patterns across the globe, containers need to be positioned across regions accordingly.

This could mean that certain shipping lines may not have containers availability at certain locations, due to an undersupply. An undersupply of containers can lead to blank sailings or equipment shortage.

Here are some of the largest shipping lines that own shipping containers:

On the other hand, shippers can also own shipping containers. However, they only make up a small number of the overall container population.

The reason why most shippers prefer not to own containers directly is because of its associated costs and impracticality. Containers need to be maintained, repaired, repositioned and bought. It’s much more convenient for them to ship cargo through an all-in rate from carriers directly.

There are some scenarios where it makes more sense for shippers to own containers directly. One example for this is when their cargo has special requirements (typically project cargo) and therefore requires the containers to be outfitted or customized in a certain way.

Another reason is that they or the consignee is located in remote areas or their cargo would need to be staged at a certain location for a longer period of time. Owning shipping containers in this scenario helps to avoid high detention costs charged by shipping lines.

You should also take note that shipping lines prefer to use their own containers. Therefore shippers often have to pay an SOC fee to carriers for using shipper-owned containers.

Container leasing companies supply and own containers for multiple reasons. Due to trade and container imbalances, certain shipping lines may not have enough containers on hand that they can release to shippers.

This means that when a shipper books a shipment with a carrier, they have no equipment available to supply the shipper with. In this case, shipping lines lease containers from leasing companies to offset equipment shortages.

There are also other reasons. Certain shipping lines are just too small to purchase and maintain containers directly and therefore prefer to lease their containers instead. In rare cases, certain shippers also lease containers to temporarily retrofit them or if certain carriers face equipment shortages.

Here’s a list of the largest container leasing companies:

Non-Vessel-Operating Common Carriers (NVOCCs) can also own shipping containers. As they fundamentally act and operate as carriers, albeit without owning their own vessels, there are several reasons why they may want to do so.

If they are serving a certain type of market or segment that requires specialized containers, owning containers allows customization. NVOCCs sometimes also own containers for project cargo that have unique sizes and modifications, whereby a general dry container from a shipping line won’t suffice.

On rare occasions an NVOCC may have a longstanding business relationship with a shipper who requests a certain type of container. The NVOCCs would treat this type of container ownership as part of an investment to facilitate shipments for their customers.

Here are some of the notable NVOCCs who own containers:

In essence, a freight forwarder organizes shipments and facilitates documentation flow between all respective parties. In that sense, certain NVOCCs such as Kuehne + Nagel, DB Schenker or Expeditors act as both the carrier (NVOCC) and the freight forwarder.

Therefore, these types of companies own shipping containers for the same reason as mentioned above. Companies who exclusively act as freight forwarders can also own containers.

How to Identify Who Owns a Container?

There are several ways to identify container ownership. The easiest way is to simply look at the side of any shipping container. Very often you’ll be able to see the logo of the owning company.

On the image below, you’ll see that these containers are owned by OOCL. Their bright red logo is featured on the top left corner. Shipping lines, leasing companies, shippers, NVOCCs and freight forwarders will typically brand their containers with their logo.

On the other hand, you can also identify container ownership by identifying the prefix of the container number, which is located at the top section or door. According to the ISO standard (ISO 6346), all containers are required to have container markings that are made of a prefix and a serial number.

For the example below, you can see that this container is owned by Hapag-Lloyd as indicated by the prefix HLXU. Each container owner will have their assigned 4 digit prefix.

Should You Own Shipping Containers?

Whether you or your business should own containers depends on the nature of your business and your requirements. Generally speaking, it makes financial and practical sense for shipping lines, leasing companies, NVOCCs and freight forwarders to own containers, as doing so facilitates their core competencies.