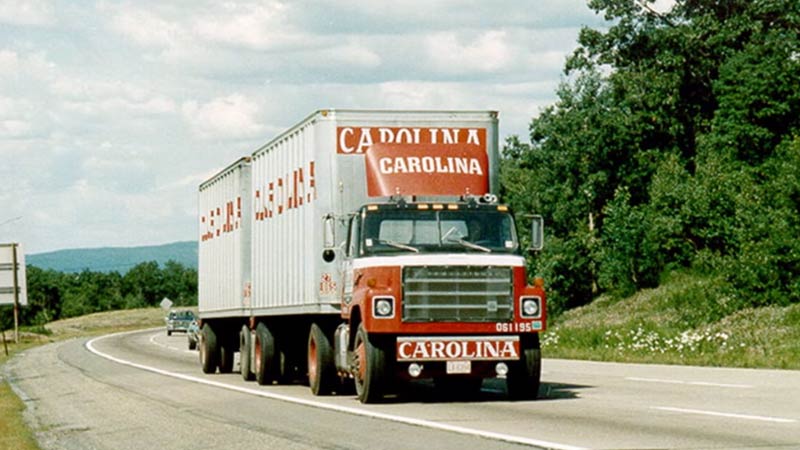 Carolina Freight was one of the largest trucking companies operating in the United States. Established in 1937, it offered freight transportation services to many parts of the country over the decades and quickly grew into one of the top national carriers.

However, Carolina Freight went out of business due to fierce price competition, increased overhead costs and was subsequently acquired by Arkansas Best Corporation (ABF Freight) in 1995. During the same year, Carolina Freight ceased its operations.

Today, Carolina Freight remains an iconic name, as it helped to pave the way for modern-day trucking in the United States. With its rich history and many years of existence, the company acquired many smaller trucking firms, cementing its name into the industry’s history.

A Brief History of Carolina Freight

The following section will feature a brief history of Carolina Freight and the ingenuity of its founder, C. Grier Beam. The article will take you on a journey from its inception, rise and downfall, to what remains today.

The Humble Beginnings of Carolina Freight

The company’s roots can be traced back to 1931, when founder C. Grier Beam bought his first truck in Cherryville, North Carolina. At the time, his company was named the Beam Trucking Company.

In its early days, Beam hired several part-time drivers and they would haul whatever needed to be sold or transferred from one place to another. It was in 1934 that the company established its headquarters and obtained a major contract to haul cotton yarn to New England.

In 1935, two competitors to the Beam Trucking Company had emerged in Cherryville. One of these was Mauney Transfer while the other one was run by Cone Beam. Beam decided to merge with Cone Beam, which later on decided to purchase Mauney Transfer.

The Rise of Carolina Freight

By the end of 1937, several of Beam’s partners gave up on the company and ended up selling their shares to Beam. From this point on, Carolina Freight became a family business as multiple family members bought shares in the company. The company’s first office, complete with a maintenance shop and loading dock, was subsequently established in Cherryville.

By 1939, the company was operating a total of 53 vehicles and showing signs of steady growth. It made its first profit of $5,546.56 (about $107,000 adjusted for inflation in 2021). In the next few years, during World War II, the company received government contracts for hauling clothing and ammunition.

During these years, Carolina Freight also acquired two other companies which gave it rights to operate across almost the entire East Coast. By the end of the 1940s, the company had grossed about $3 million and was operating six terminals in different cities.

The Peak of Carolina Freight

The 1960s is when Carolina Freight really took off and set a new benchmark for the US trucking industry. It got a contract with Sea-Highways, Inc., which allowed it access to Central America. Many additional terminals were opened over the coming years and in 1963, the company went public. For the first time in its history, Carolina Freight was a publicly listed company, garnering interest from many investors across the country.

By 1970, Carolina Freight had become one of the 20 most significant general freight carriers in the United States. Four years later, it merged with Leonard Express for strategic reasons, which enabled the company access to East-West service routes.

The company did have some ups and downs, especially during the recession of 1975, but it bounced back relatively quickly and started focusing more on less-than-truckload (LTL) shipments during the mid-1970s.

During the mid-1980s, the company started turning into more of a national carrier rather than a state-wide carrier and in the coming years, it started focusing on international operations by opening subsidiaries in Canada and Mexico.

The Fall of Carolina Freight

After 1991, despite branching out, the company’s profits dropped to $1.6 million from the previous year’s $2.4 million. The company transformed from a national carrier to an inter-regional carrier in the next couple of years, which led to substantial losses.

Due to new competitors in the market, Carolina Freight was unable to make a profit until 1994 when it was allowed to operate for three weeks while its competitors were unable to. In an attempt to reduce losses, the company tried many different routes and strategies, including the closure of breakbulk hubs in various locations.

However, the company was still bound to lose more money because of significant drops in shipments and also because of the costs that were associated with the transformation into an inter-regional carrier.

The Acquisition of Carolina Freight

Following the financial losses, the company was acquired by Arkansas Best Freight System Inc. in 1995. ABF, at the time, was the country’s fourth-largest trucking company. It announced that it was purchasing Worldway Corp., the parent company of Carolina Freight Carriers Corporation, for nearly $72.2 million.

This purchase would prove to be a much needed lifeline for Carolina Freight which was trying to reduce losses and operate more efficiently.  Unfortunately, shortly after its acquisition, Carolina Freight ceased operations.

While the company may not exist anymore, its impact on the trucking industry has been significant. Today, the remnants of the founder’s history can be seen in the C. Grier Beam Truck Museum, which is located in Carolina Freight’s hometown, Cherryville.

To this day, the showcase of its rich history and the display of its old trucks, keeps the memories of Carolina Freight alive and pays homage to one of the greatest trucking companies that has graced the industry.